Even by RuPaul’s Drag Race standards, episode 11 of All Stars Season 7 was shockingly flippant with the established rules of the game. By awarding three stars to the week’s top two queens, the season’s penultimate episode was a true sudden death playoff, with every single queen having a shot at making next week’s “LaLaPaRUza” lip sync smackdown for the crown.

Fans would certainly be forgiven for feeling upset by this news. It effectively minimizes the hard work of the past ten episodes. Plus, every single queen already had a shot of making the finale — except for Shea Couleé. Was this twist specifically designed to catapult Shea above her peers and secure her a spot in the finale? It certainly seems that way. But that wasn’t the only twist this week. Arguably, an even more shocking turn of events was the pivotal role the “Twinner” alliance played during the episode’s final moments.

There’s a lot to unpack here, so let’s get to our weekly power rankings. The math has been adjusted to account for episode 11’s three-star twist (see our methodology below).

RuPaul’s Drag Race All Stars introduced a new twist on the ultra-popular format. The competing queens are all former winners, baby. And because we’ve seen these girls before, we’ve got some hard data on their previous performance we can use to rank the queens and provide insight to fans as they compete in their Drag Race-themed pools and make bets with their squirrel friends.

We’ve created a simple formula, accounting for the queens social media following, their performance on previous seasons and how they’ve done so far on All Stars Season 7 — ranking this season’s contestants from one to eight. 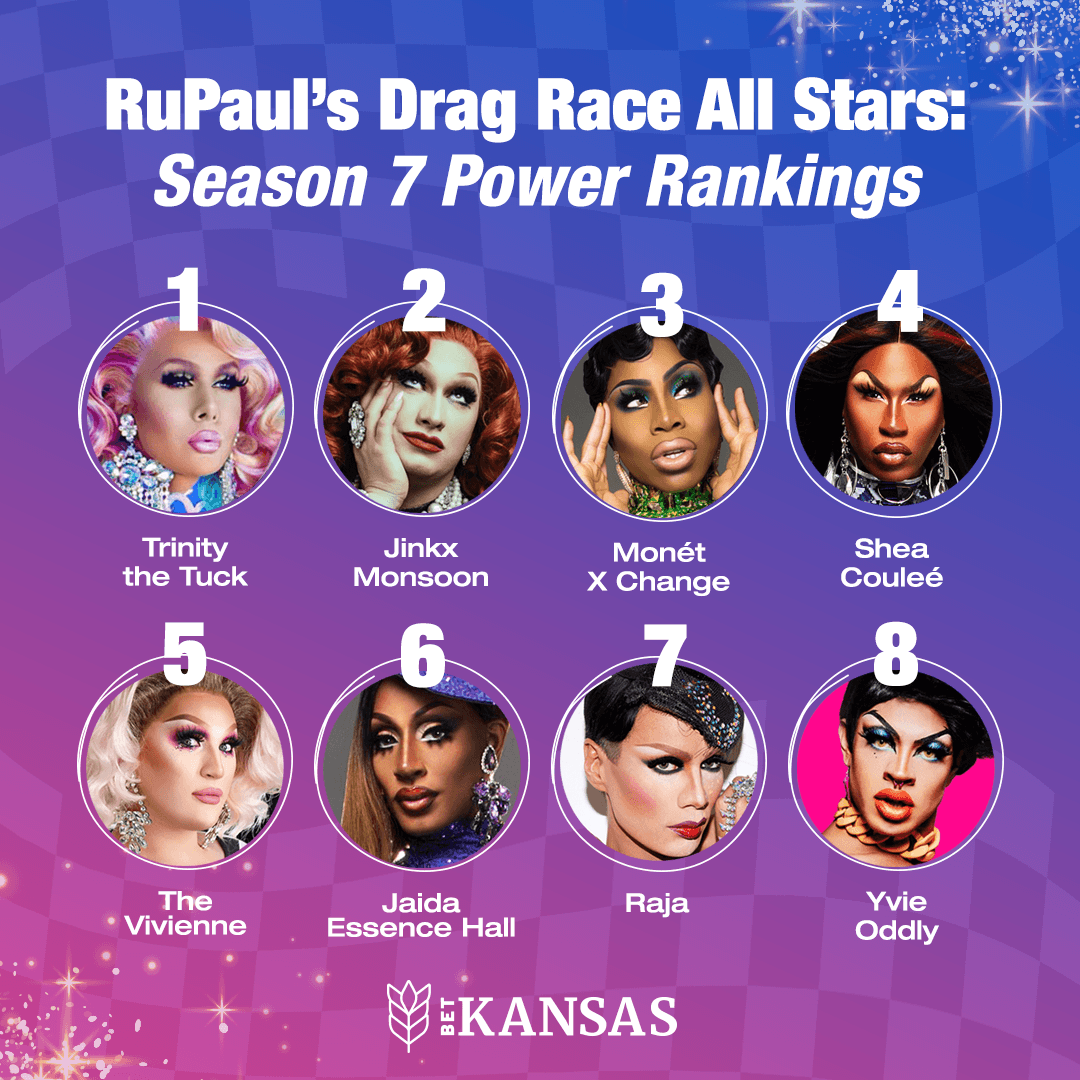 Who Would You Bet On to Win this Season?

Although Kansas sportsbooks are not legal, they should be soon. If any operator, like BetMGM Kansas, were to offer bets on RuPaul’s Drag Race All Stars Season 7, who would you bet on?

To determine the power rankings we used a simple formula: 1 point for all “maxi” challenges won on winning season and on All Stars Season 7 (+) Instagram followers divided by 1 million (-) positions outside of 1st place if the queen did not win her inaugural season (-1 for 2nd place, -2 for 3rd places, etc). This latter distinction only applies to 3 or the 8 queens competing (Shea Couleé, Trinity the Tuck & Monét X Change).

Jeff Parker is an Entertainment Writer for BetKansas.com. A writer for film, television and the internet, Jeff is a life long movie buff, with an actual Masters Degree in Popular Culture. He lives in Halifax, Nova Scotia, where he works full time as documentary filmmaker and producer.