It was an opening weekend to remember for the six Kansas sportsbooks that participated in last Thursday’s “soft launch” in the state.

Another way to describe how popular Kansas’ sports betting kickoff was is that the roughly 1.975 million sportsbook account usernames created during the opening weekend represented a higher percentage of the state’s adult population (6.7%) than the launches in New York (3.3%) and Louisiana (3.6%).

Here’s what else stood out from Kansas’ opening weekend of legalized sports betting, according to the folks at GeoComply and operators in the marketplace. 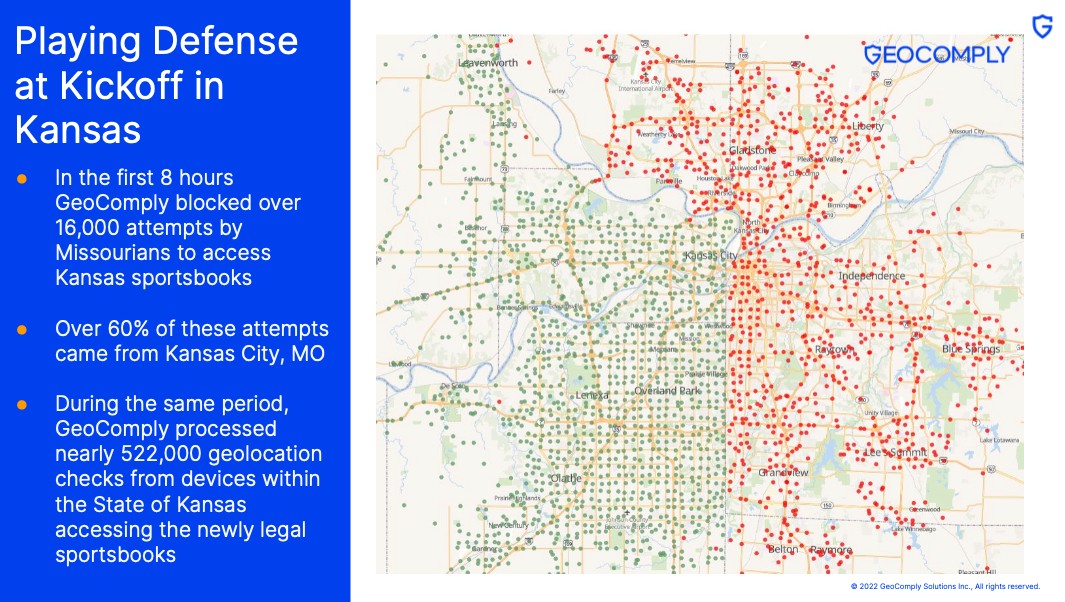 Missouri Residents Try to Get in On Kansas Action

Another figure that stands out from GeoComply’s opening weekend report in Kansas is the sheer volume of attempted wagers by residents in Missouri.

Nearly 80,000 attempts to access the Kansas sports betting network by 12,000 unique sportsbook customers in Missouri were detected over the weekend.

Unsurprisingly, the two most popular Kansas markets by geolocation checks were Overland Park and Kansas City, Kan., thanks in large part to their location along the Kansas-Missouri line.

Missouri failed to pass a sports betting bill during its regular 2022 state legislative session, and lawmakers in the state took note of what was happening in Kansas over the weekend.

“No, I’m not good with it,” said Missouri State Senator Caleb Rowden on Twitter when asked about wagering dollars leaving the state for Kansas. “And it will be a priority of mine to rectify it in our upcoming regular session.”

Aubrey Smethurst, who serves as GeoComply’s director of marketing and communications, said the company’s relationship with the six Kansas sportsbooks allows it to paint a picture of the market in totality.

“GeoComply is the leading provider of geolocation and cybersecurity services for the U.S. sports betting industry,” Smethurst said in an email to BetKansas.com. “We support 100% of the mobile sportsbooks in Kansas and therefore our statistics provide a reliable overview and insight into the state of the industry.”

Two of the biggest sports betting hotspots in Kansas during the past weekend were in the college towns of Manhattan and Lawrence.

Fans of Kansas State led the way before, during, and after the team’s 34-0 shellacking of South Dakota, with 3,500 geolocation transactions from Bill Snyder Family Stadium on Saturday.

That figure represented nearly a quarter of the transactions in the Little Apple for Saturday. The 1,500 unique player accounts that checked in from the stadium represented 42% of all accounts in the town that day, according to GeoComply.

The KU figures represent 12% of all transactions registered and 17% of all unique player accounts in Lawrence on Friday, the firm said.

With college football in full swing and the NFL opening this week, BetKansas.com is the place to be for the top Kansas betting promos.

How the Opening Weekend Went for Operators

Among the operators that launched Thursday was FanDuel Sportsbook Kansas, which has already seen outsized interest from its customer base in Kansas, according to Kevin Hennessy, who serves as director of publicity for the operator.

So far, college football has been the most popular sport to wager on for FanDuel Sportsbook customers, followed by baseball, tennis and soccer.